According to Statista, the e-learning market will reach $243B by 2022. The predicted growth and uncertainty in offline education related to the pandemic and significant changes in the world make e-learning products popular. Let’s deal with a tech stack required for e-learning apps and platforms.

Native apps are developed for iOS or Android. E-learning iOS apps can be created with the help of two programming languages: Objective-C or Swift.

Swift is known as a compiled programming language that was created by Apple. In contrast to Objective-C, it includes enough modern features. APis in Swift can be easily read and maintained. Unsafe code is easily avoided in Swift because of the right approach to variable initialization, checking array indices and integers, error handling, etc. Thanks to the well-considered combination of low-oriented primitives and object-oriented features, Swift makes possible fast and powerful app development.

The set of tools for mobile app development consists of two basic elements: AppCode and Xcode. Xcode is the official Apple product that offers needed features and a convenient visual interface for iOS development. AppCode is an open-source tool that has fewer features than Xcode.

You can use different UI frameworks to create graphical components of the e-learning iOS apps. Highly demanded among them are SwiftUI and UIKit. UIKit is the basic tool that allows building graphical components and contains the set of templates that define design elements as interconnected blocks. SwiftUI appeared 2 years ago and works only for iOS13 and above, but it has multiple features.

Java appeared more than 26 years ago and is known as a high-level object-oriented programming language. Java creators aimed to design secure, architecture-natural, and high-performance language. As a result, it has become a key pillar for Android. It’s notable that the Android SDK uses Java for apps but doesn’t apply its standards.

Kotlin is a relatively young technology. The programming language originated in 2010 by the team of IDE JetBrains. The official release happened in 2016. At the moment, the Kotlin team consists of contributors and full-time members. Kotlin is a streamlined version of Java, so switching from one to another is quite simple, although Kotlin code is much more accurate and safe.

Let’s move on to UI frameworks and Android development tools. Android studio provides tools for building apps on all types of Android devices and has a lot of features – from visual layout editor to fast emulator. To create UI for e-learning Android apps, developers use Android UI with pre-built templates that accelerate the development process or Jetpack Compose.

Let’s take an e-learning marketplace as an example. Its main components will be a web-based app, tools for video and data processing, and cloud storage. To integrate the functionality into a web app, we will require an API. Also, it’s possible to choose Monolithic or Microservice architecture. 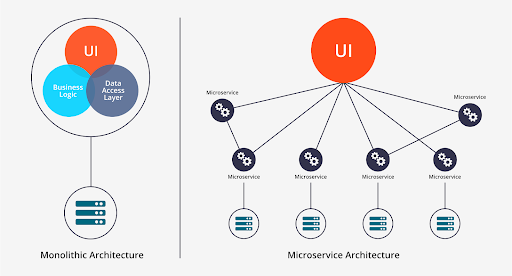 The right set of tools enables us to transcode, upload, and stream videos. Thanks to video service, users can upload a video to the platform or send transcoded materials to the user devices. The quality of the video depends on video formats, operation memory of the device, and quality of the internet. Therefore, a video service transcodes files and generates various versions of the video in different sizes, thus allowing users to watch materials regardless of their size. You can see the schemes of transcoding and live transcoding services at the pictures below. 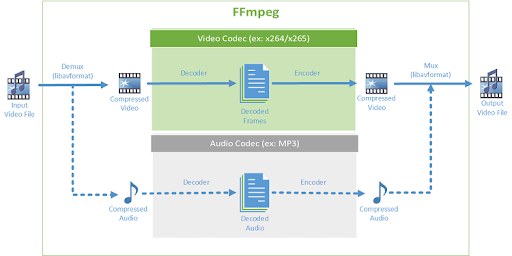 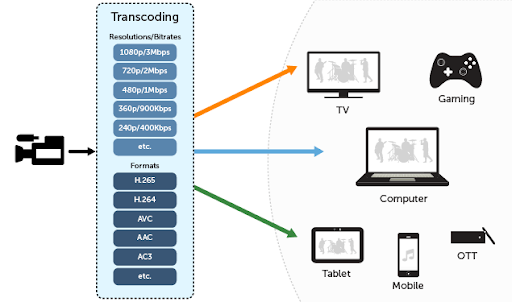 To arrange audio and video communication between browsers, developers use WebRTC for such platforms. This tool is suitable for desktop browsers, iOS, and Android, which is crucial for e-learning products that should provide access to all features via a mobile phone. The other two elements of video processing are transcoding and live transcoding services.

The next component of the system is storage that consists of four components: main database, analytics, file storage, and real-time database. Together with other elements, they constitute the back-end tech stack of the e-learning platform.

The type of technologies lying under the hood of the e-learning app or platform depends on the functionality. If you need to develop such a tech solution, feel free to get in touch with CyberCraft to discuss your goals and requirements. Our team has been professionally engaged in e-learning software development since 2012, so we have deep expertise in the creation of scalable apps and platforms.